There is an article on the Cartoonists Rights International website on Eaten Fish and the campaign.

And Ben Doherty and Helen Davidson have an article at The Guardian about the campaign as well.

The nice people at Get Up have also gotten on board.

And don’t forget the petition is still here.

Some examples of the work of cartoonist Eaten Fish, currently detained on Manus Island.

Mahmoud Salameh is a Palestinian-Australian cartoonist, animation filmmaker and graphic artist based in Sydney. Mahmoud has years of international experience working as a professional artist in Syria, Lebanon and Australia as well as working for well-known Arabic newspapers and magazines such as Al Safir and Al Adaab. Mahmoud is a Palestinian refugee from Syria who was in Australian detention centres for 17 months. 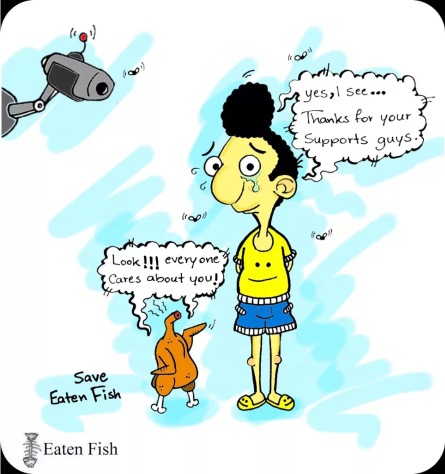 Eaten Fish is a cartoonist named Ali, a 24 year old Iranian artist who has been held in Australia’s immigration detention centre for 3 years now. 18 months ago First Dog on the Moon began mentoring Eaten Fish and they have since kept regular contact.
Throughout the three years that Eaten Fish has been incarcerated on Manus Island he has suffered from ever worsening and extreme OCD, panic attacks – that can leave him literally paralysed, and Complex PTSD.  Earlier this year Eaten Fish was seriously assaulted.  Since this assault he has continued to endure ongoing sexual harassment from guards, staff and some other detainees.  This compounds the effects of the assault and his serious mental health conditions.
Eaten Fish is now und
er 24 hour watch and remains in the isolation area, Green Zone, of the detention camp. He continues to be propositioned and sexually harassed and his state continues to deteriorate. Eaten Fish needs to be brought to a safe place where he can receive the  specialised treatment for the serious conditions he suffers from.
We are launching this website as part of a campaign urging the Australian government to immediately remove Eaten Fish from the Manus Island detention centre and bring him to Australia for the specialised treatment he requires.
Sign the petition here.
You can read more about Eaten Fish go here to the RAPBS campaign and in the Guardian here. A gallery of his cartoons is here as well.
A number of LEGENDARY Australian cartoonists are drawing cartoons in support of the campaign to get Ali off Manus and into proper treatment including this one by Firstdog Onthemoon.
As the cartoons are drawn, they will appear here. You can see them below. Are you a cartoonist? Would you like to support this campaign? Contact us on twitter @firstdogonmoon or firstdogonthemoon at hotmail dot com.
July 19, 2016September 20, 2016 mronthemoon

Some of Australia’s most wonderful cartoonists and Jon Kudelka have kindly contributed to Cartoons in support of cartoonist Eaten Fish who is currently detained on Manus Island.